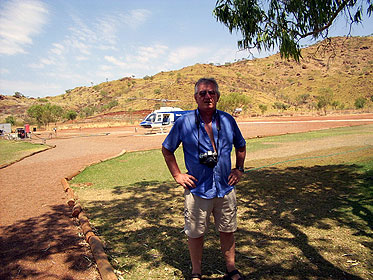 Reflecting the intense colours, defined contours and unique atmosphere of the Australian outback, is the essence of a Louis Dalozzo painting. An aura of space and timeless beauty overwhelms the observer when peering into one of Louis Dalozzo’s landscapes.

Louis was born in Italy, married Belgian artist Lucette in Brussels where they settled while looking for something quite different”, Louis reflects, adding, “Somewhere untouched”. Leaving the densely populated cities of Western Europe they travelled to the Pacific island of New Caledonia where they spent a few years painting the island tropical landscape.

The traveling spirit still had a grasp on them and it was not until they discovered the “Great southern land” that they both found exactly what they were looking for. Louis was so taken by the sheer expanse of the deserts, canyons, gorges and rainforests it was in awe, that he made a life changing decision to focus on his childhood passion.

Louis has been painting professionally for over 30 years holding exhibitions throughout Australia in Belgium, Los Angeles and New Caledonia. Works hang in Brisbane’s Tattersall Club, The Design Centre in LA; in offices of corporate giants including American Express, MLC Insurance, Mercedes Benz and by the royal family of Abu Dhabi.

He is renowned for his unique self-taught style, which accurately conveys the mood and feel of the rugged outback. His contemporary landscape, hard-edged, vibrant, with unparalleled visual perspective have won him acclaim and notoriety by both corporate and private collectors the world over.

The landscape of Louis Dalozzo brings a refreshingly new approach to a subject matter widely used within this country. He persists in exploring new avenues of visualization in reference to composition and colour, which leaves you absorbed and sometimes consumed by the vastness of the panorama. “Few places on earth do we find such stunning beauty,” He says. For this is the subject that continues to impact his contemporary expression in a way so singular that you can instantly recognize a Louis Dalozzo at a single glance.

As Louis contemplates life as an artist he replies,

How lucky we are to live in the most beautiful country, to paint our visions and live out our dreams…